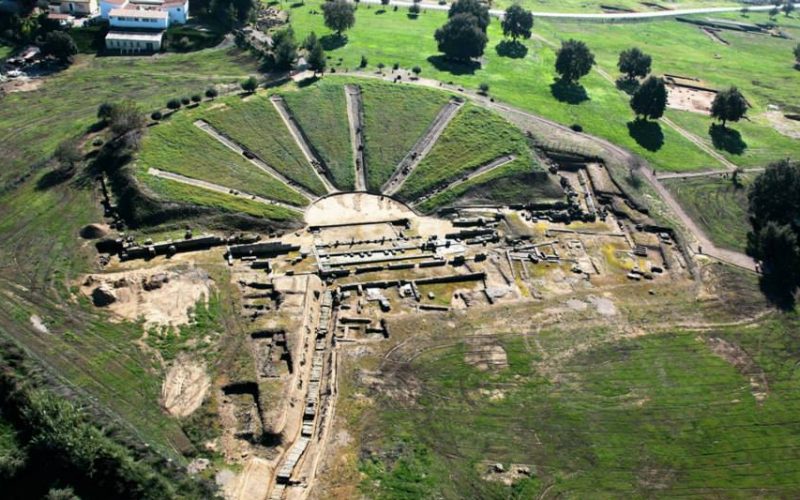 Ancient Ilida, was in antiquity, the organizing city of the Ancient Olympic Games and a place for the preparation of athletes for more than the Millennium. It was built on the left bank of the Pinios River (Acronyia) and the coastal plain (Koilis Ilis), while it was the strong city – the state of the Heli, which spreads to a very large extent. It is located near the capital of the Municipality of Ilida, Amaliada and the excavations revealed parts of the market and mainly the city.Theaters, arcades, high schools, hippodrome, sanctuaries and workshops make up an assembled area that was to play an important role in the “competition” for both the ancient and the modern world. According to archaeological sources, the site has a wide range of habitation that lasted with small gaps from the beginning of the Middle Paleolithic period until the end of the Early Byzantine period, when the city is abandoned. According to the myths, the founder was Aetolos Oxylos, who according to tradition, benefiting from the Dorian descent, subjected the oldest inhabitants of the country and created the first settlement. Famous personalities of the ancient world were from Ilida, such as Iphitus (9th or 8th century BC), organizer of the Olympic Games, Hippie (5th century BC), Sophist and Pyrrón (365-275 BC) ), A skeptical philosopher. The excavations in Ilida were made for the first time in 1910 by the Austrian Archaeological Institute whose director was Walter in the years 1911 – 1914. In the excavations that continued until 1914 participated A. Orlandos. In 1960 the excavations were continued by the Greek Archaeological Society under the direction of Professor N. Yialouris.

What can one admire in the Archaeological Site
• Theater of Ancient Ilida: Built with a suitable configuration on an old ridge of the Pinios River, to the north of the market, the theater of Ilida presents the rather rare singularity that its cavity was dirt and no stone lining. The oldest phase of construction dates back to the first half of the 4th century. B.C.

• Purchase of Ancient Ilida: The Market of ancient Ilida was of great importance. According to the traveler Pausanias who visited the area in the middle of the 2nd c. AD, was called Hippodrome, because there was training of the horses (6, 24, 2). Although it had no clear boundaries, it had the shape of an irregular trapeze.